One indication of the relevance of stochastic laws in biology is the fact that genetically similar cells can behave in very different ways. This suggests an analogy with statistical physics, in which stochastic laws govern the behaviour of large ensembles of particles. Biological randomness has important theoretical and practical consequences in medicine and may be responsible for the resistance of pathogens or cancer to drug treatment. Modeling biological randomness is now a major field in theoretical biology and has been approached with methods adapted from physics. Like in physics, biological systems are governed by hierarchical processes involving variables with different timescales. Contrary to most physical processes, biological systems can exhibit inversions in the relationship between timescale and hierarchical rank. As a consequence, microscopic fluctuations can be transmitted to and even amplified by the phenotype. We are studying the randomness of gene expression in relation to developmental biology and infectiology. Our mathematical approaches to biological randomness are based on hybrid approximations of discrete, stochastic, chemical reaction netoworks, that are well adapted to the situation when microscopic timescales are slower than mesoscopic ones. 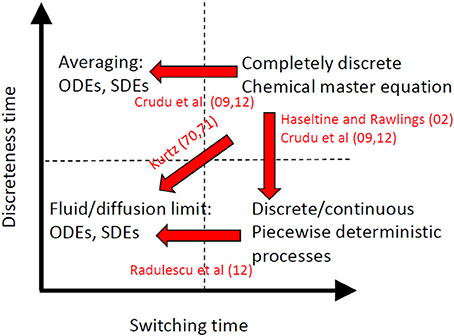